The running of the bulls- Pamplona 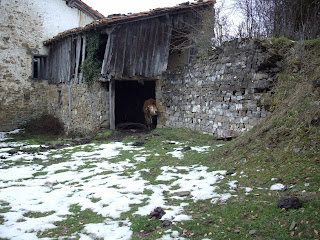 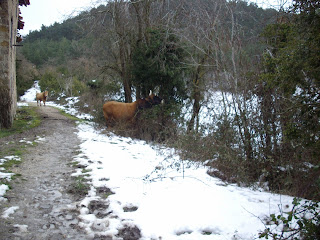 Today our walk will take us through our first major town (pamplona) but we will only be stopping here to buy new shoes for Gary. His KT26s aren't up to the task and we need to walk on the road all the way as his toes are still very sore. Pamplona is an interesting city but the running of the bulls is the single most characteristic event of the festival of San Fermin.It is the event that has given this festival world-wide fame and which is broadcast around the globe. It is held at 8am each morning from the 7Th to the 14Th of July. It consists of largely young men (although women may also run) who run in front of the bulls to lead them from their pens into the bullring. It usually lasts approximately 2 minutes, although when complications arise due to loose bulls much longer.
The lenght of the run is 830 metres, you don't have to sign up anywhere to take part; you just enter into the run and choose the street where you will run and do the best you can.
The run began as part of the process of moving bulls from the edge of town to the bullring. During the mid 1800's runners began to join the herd on their journey. Many runners who gather at the bottom of Santo Domingo, the start of the run, crowd together and sing a homily to the image of San Fermin that goes something like this "We ask San Fermin, as our patron, to guide us through the bull run and give us his blessing."
A rocket goes off at the moment the bulls are let into the street. A second rocket goes off to let everyone know that all the bulls are now in the street. This is the moment of truth, the bulls run like the wind. It is impossible to race them or keep up with them for very long. As well as the danger inherent in running in front of a bull (it's worth remembering that this is an animal which weights about 600 kilos and which has 2 hard, sharp horns which can practically cut through anything, not to mention possible bruising from just being stepped on, there is also the problem of overcrowding in the run. Once the bulls have past the run for you is over, unless a bull turns back and now you are faced with a potentially life threatening situation. This does happen occasionally. When a 3rd rocket is heard all the bulls have arrived in the bullring, a 4Th rocket means all bulls are safe in their pens. Between that 1st and last rocket only a few minutes have gone by, but what a couple of minutes.
Warreners Tales at 15:25
Share